Up until today, all of the Photomatic photos I have written about are from the USA. Photomatic booths were different to other photobooth machines, as they produced only one photograph, which was delivered to the sitter ready framed. Frames were made of cardboard and metal in various coloured finishes. Towards the end of their existence the frames were plastic.

In Australia, the Powerhouse Museum in Sydney believes that only one photomatic machine was imported into Australia and it is possible that it was never put into service. Finding an Australian photomatic example is extremely remote, therefore finding any photomatic that is not American, was quite exciting for me.

This picture of mother and son was taken in Scotland. The Scottish seller theorised that it may have been taken at the Empire Exhibition, in Scotland in 1938. The event was an international exposition held at Bellahouston Park in Glasgow, from May to December 1938. It showcased the best of Scotland’s industry and creativity, while also offering a chance to boost the country’s economy, which was recovering from the depression of the 1930s.

I find the atmosphere of this photo to be more restrained and demure than in most American images of the same period. The clothing is more conservative and the expressions of these two are more tentative and shy than the average North American sitter. It could be that these two are not typical of the British Isles. They are just two quiet people enjoying a day out. However to me it has a particularly British feel to it; friendly, homey and comfortably welcoming. 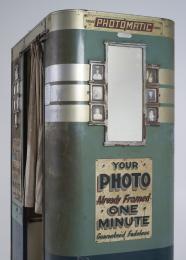