I have mentioned St Kilda’s old amusement venue, Luna Park, many times in this blog. I thought it would be nice to show you what the old place looks like after a recent facelift. There are no longer any photobooths there but it is still a place that captures my imagination. 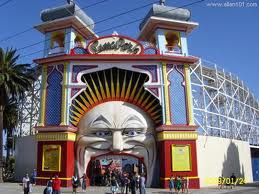 The entrance by day. 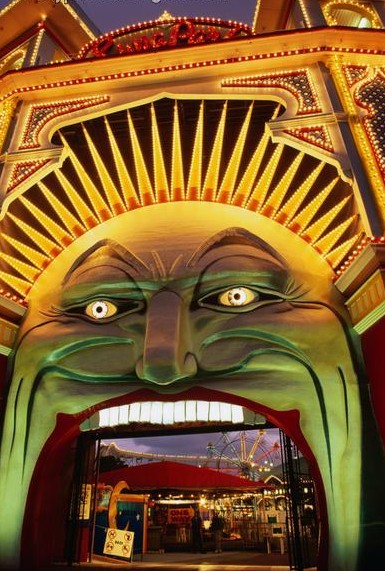 The entrance by night.

Today is the first time since 1996 that I have attempted to reconstruct this strip. Initially, I didn’t recognise these fragments as belonging together. I am surprised at how differently the pieces have aged. A possible reason for the vastly different tones, could be that some were discoloured by other items that were in the bin where they were found. I cringe at the thought.

So what happened here? This young couple entered the booth and snuggled up, looking at the camera, smiling as each flash went off. They waited excitedly for the photos to drop into the shoot. While still wet, they looked at them together and he agreed that there was at least one wonderful shot of her, but none of him that he could admire. She liked them all despite the off kilter framing. They couldn’t agree to disagree. Within five minutes he’d torn up the strip and binned it.

Our young lady returned later to retrieve the cast off images that she’d liked, for the most part not bothering to collect the images of him. She was still in a huff about the destruction of an, albeit flawed, memento. 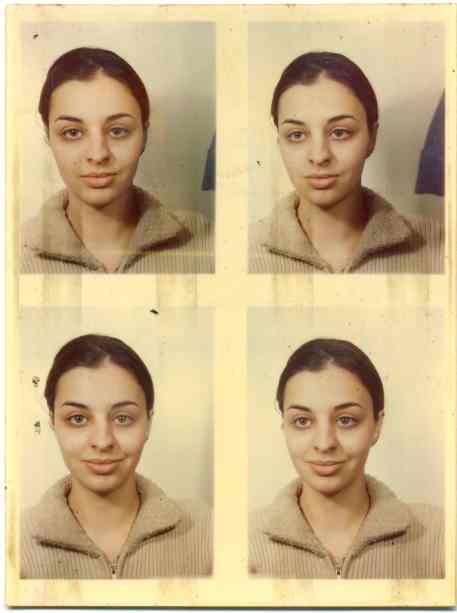 This set of photos was found at Flinders Street Station on the 15th of October 1997. I was on my way to meet my school friend, Francis Flanagan. We went to see the film Chasing Amy. I have absolutely no memory of that film, whatsoever.

So who is this young woman and why was this set of pics chucked on the ground? We’ll probably never know who she was/is, yet we can tell a number of things about her and the circumstances under which she took these pictures. She definitely had a poor comprehension of our littering laws, for a start. She is certainly a beautiful girl, who had a certain idea of how she should look in a portrait.

There is a smidgen of a sleeve showing in the top two images. This suggests to me, that she was not there to get a set of fun shots. If she had been, her demeanor would be quite different and the person standing beside her would, most likely, have joined in.

Could it be that she was actually using this booth to get passport photos?? An outrageous idea to someone who sees these automata cameras as toys. If that indeed was the purpose of this sitting, then this dirty set of pictures, with roller marks obscuring parts of the face, would have been unusable. Another reason they could have been discarded is that the four identical portraits option was not chosen.

Obviously, I love it when these photos don’t work and they are rejected for whatever reason. Unfortunately, with these dip and dunk machine all but gone, the unexpected find has become rarer and rarer. 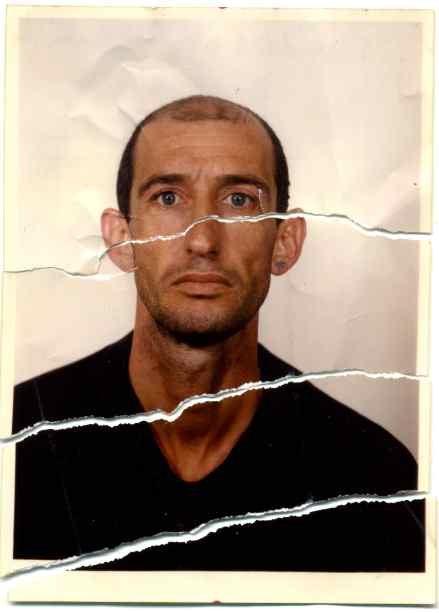 I found this large-format, single-shot photobooth photo at Melbourne’s, Victorian era, railway station at Flinders Street. I haven’t seen a machine with the option of choosing a large portrait photo in the city for a long time, probably since the day I found this in 1997.

I’d say this example of a booth photo is the epitome of why we call small id photos mugshots. With his unsmiling face, maple leaf ear tattoo, piercing deep blue eyes and furrowed brow it could easily have been a police identification photo. In fact a friend of mine had no trouble believing this was a picture of a wanted man. Personally, I think he has a certain rugged charm, despite his solemn demeanor.

So why was this image torn and discarded? If he was a Canadian, as suggested by the maple leaf, he may have wanted a picture to send home. A friendlier expression might have been more desirable for that purpose. Or did he really just want four identical shots for a passport or other id? He would not have been the first to have pressed the wrong button. 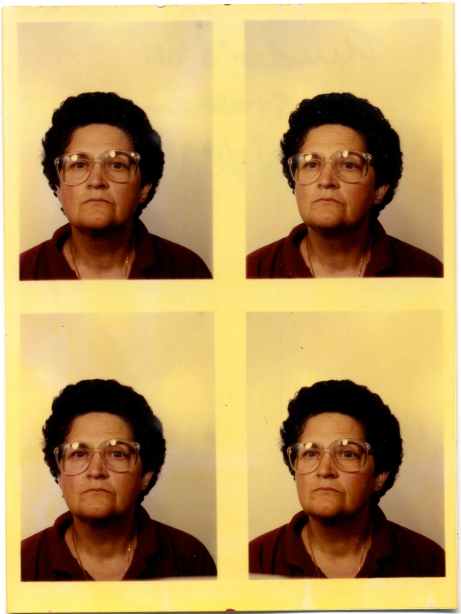 Love the “stylish” white skivvy. Was that ever in fashion?

When living in London, as my fascination with the products of automatic photography grew, I started to collect discarded photobooth photos. I have many to share but thought I’d choose a random one from Melbourne, to start with.

There used to be two old black and white, “dip and dunk”, chemical photobooths at Luna Park, a very old amusement park in the bay-side Melbourne suburb of St Kilda. Living only a short tram trip away, it was easy for me to pop in on a regular basis. Entry to the park has always been free, so it never cost me anything to scrounge around the bins and behind the booths, looking for jettisoned photographic ephemera, whilst taking a few snaps of my own for posterity.

Some days I would find complete undamaged strips, other days a few remaining remnants. I find these torn photos, melancholic and charming in their beaten up, unloved state. One can see why this pic didn’t meet the sitters’ standards, with the blank, black, blob of doom above them. Yet, I can see merit in the one picture that worked, enough to have made me treasure it, if I had been one of the subjects. 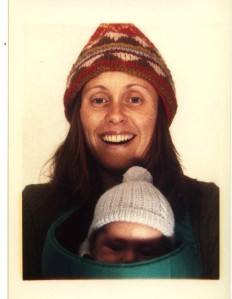 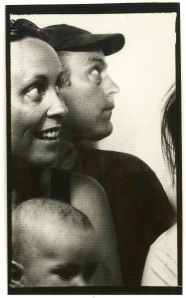 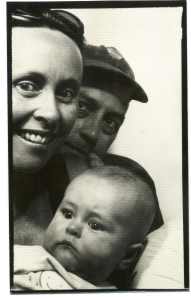 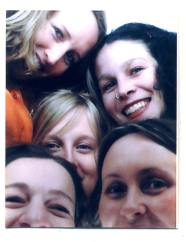 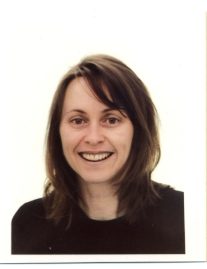 When I was living in Leicester and my cousin Krissie was living in London, for fun, I started writing her name as Xie. I used the X the same way it is used for the “Chris” syllable, as found in the spelling Xmas.*  It is her Rock-Girl Superstar name, which fits her perfectly, because to me she is a superstar.

Xie is as optimistic and generous as her mum and has an amazing sense of humour. She loves dogs, walking, fun and being mischievous…and cigarettes. Xie adores cigarettes. (I occasionally share one or two with her, just to stop her feeling like a pariah, you understand.) She is also a fabulous mother to her 9-year-old son, Ryan, who is the baby in the pics, and a supportive and loving wife to her hubby, Tony, also pictured.

To spend time with Xie is to be entertained, to laugh and be uplifted. She is one of my most favourite people in the world, but of course from what I have just written, you didn’t already know that!

The only down side in this cousinly love affair is, that apart from a blissful 2 years in the UK, we have never lived in the same country. Even then, when we finally managed to be on the same island, we were not in the same region. We made as much time as possible to see each other, always including her sister Rachel, when we could, and had some fine adventures exploring the countryside around Leicester and cool shops and cafés in London.

These pics were taken over a relatively short period, mostly in the UK, and are in chronological order.

NB For those of you with an etymological bent, the spelling Xmas should be pronounced the same way you’d say Christmas. The X comes from the Greek letter Chi, which is the first letter of the Greek word Χριστός, translated as “Christ“. Xp was also a commonly used form to shorten the manual labour of producing hand written manuscripts. Wikipedia has a great article on the 1000 year-long history of this abbreviation.

My last weekend in Paris was spent with Helen, Moana and her then new boyfriend, now husband, Mark. Not having met him before, Mark made a BRILLIANT first impression.

In our first exploration of the city together, the four of us decided to climb the Eiffel Tower. When we reached the top, Mark whipped out a hidden bottle of bubbly complete with champagne flutes. So many envious eyes were on us, as we watched the cork pop and fly off into the Seine. With the attention of all on the platform, focused acutely on his every word, he made a toast to us and our Parisian adventure together. I’m not sure about Helen or Moana but I felt like a veritable celebrity, sipping my drink in the elegant, albeit plastic flute, taking in the views of Paris and being the centre of attention. It was definitely a highlight of my three months in The City of Light.

Once back in Australia I again started making hand-made cards but with more drive and flare than I’d ever done before. I took a part-time job as a shop-chick at The Nature Company gift store, in Little Collins Street, (now unfortunately defunct), and set to work establishing as many outlets as I could for my paperwares.

The photo above was taken at Luna Park in St Kilda soon after my arrival home. I had lived with English national Lydia in Seynod, France while studying in Annecy. She was just out of Uni and full of a wonderful joie de vivre. She stayed with me in Melbourne for a week. During her stay we went to Phillip Island on a quest to find some of her long-lost relations. 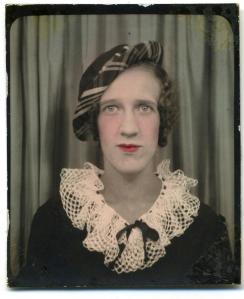 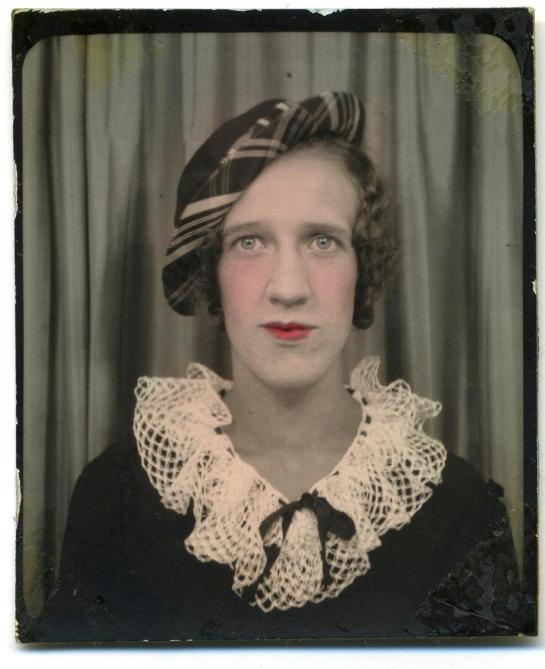 Another favorite from my collection. Look at the broad nose, flat chest and vague signs of a five o’clock shadow. Is it just me or is this also a man in drag or is it simply that there were not as many woman using depilation techniques and make-up in the 30s and 40s? The lack of an adam’s apple could be evidence I am wrong. Maybe it is just me. And my Dad. He also thought it was a man.

I do have a penchant for the androgenous sitter in any photo.  I am always on the look out for them. Somewhere, I have hidden away, a brilliant cabinet card photo of a very posh looking “lady” who is the spitting image of actor/author/polymath (and one time comedy partner of House star, Hugh Laurie), Mr Stephen Fry. If you know what he looks like, you will understand that that makes her a very unusual looking woman.

I bought this from one of my favourite online sellers, Albert Tanquero. Check out his store if you have an eye for the curious. The title of this post, She Heard Her Broken Heart Would Heal in Time was used by Albert in the listing of this item. I do love a bit of romantic creativity in an Ebay seller!