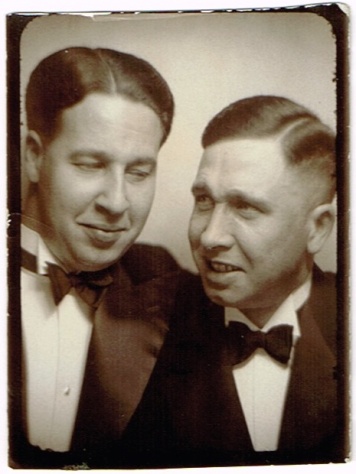 The way they have parted their hair, the short back and sides cuts, and the style of their Black Tie formal wear, puts these dapper gentlemen and this photo firmly in the 1930s. They remind me of the gorgeous, super talented dancer of that era Mr Frederick Austerlitz. (See photo, below)

The expression on the gentleman on the left’s face suggests to me that these two may not have been purely friends. His gaze, plus his lips pursed in a gentle and knowing smile, suggest deep familiarity with and a strong admiration of his companion. His friend’s attention is occupied by someone else outside of the booth, but his closeness to his partner is evidenced in his relaxed demeanor in the confined space of the booth.

As occasionally happened in the USA at this time, this booth was probably in the foyer of a dance venue or club of some kind. If the gentlemen looked this smart one can only imagine how wonderful the gowns and jewellery of the ladies might have been. The dance floor must’ve been a riot of moving colours and spangles!

What happened to these two during WW2? Were they in thrall to the machinations of Nazi Germany or victims of it? I hope they escaped the worst of it and lived long and prosperous lives. 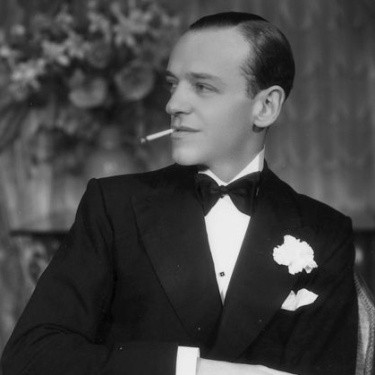 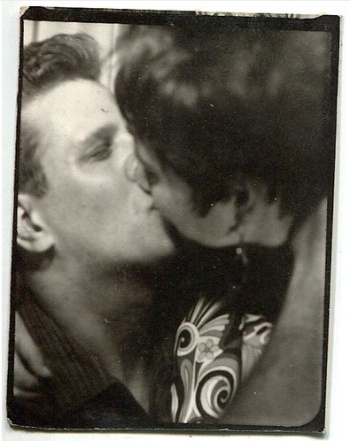 I just found this. I’m sorry it is not a clean scan! I don’t own this photo but it is a sweet continuation of the New Teeth story, so I hope you will forgive the quality. It was taken on the same day as the last photo in the series and is a fitting conclusion to a little love story. 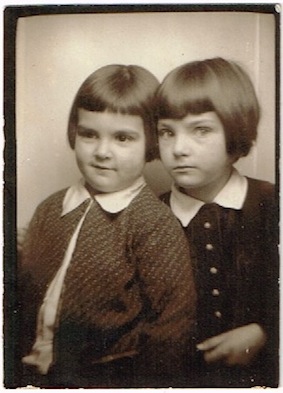 Above are two beautiful young ladies, most probably sisters, posing on a day out with an unseen grown-up. If the collars are anything to go by, they look to be wearing the same style of white shirt. The younger child, in front, is wearing a hand knitted cardigan over the untucked shirt and her sister is wearing what looks to be a velvet jacket with a very fine line of nice shiny buttons.

Below, on a different day the elder girl again poses in a photobooth. This time she is holding up a sign. I love the slightly quizzical look on her face as she looks directly at the camera, with a slight downward tilt of her head. I am looking for help from my German speaking readers, as I have no idea what is written on the chalk slate she is holding. Maybe the language isn’t German at all? It could be a school photo but with no date on it, I doubt it. Or could it be commemorating a first day at school? If so, and if this is indeed a German photo, I would have expected her to be holding a schultüte (school cone). You can see a schultüte and read about what they are at this link.

So to my German friends, I would be very grateful if you could tell me whatever you can about these pictures.

All the photos date to around the 1930s. 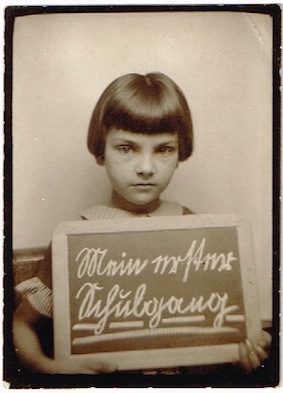 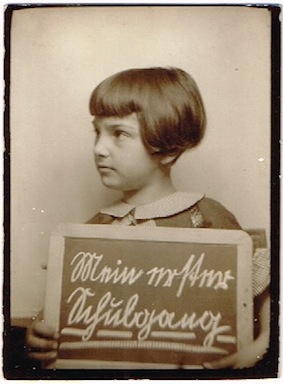 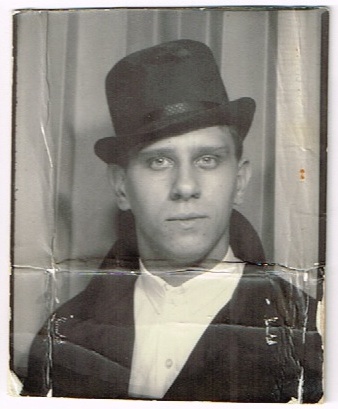 A young man hiding a secret. 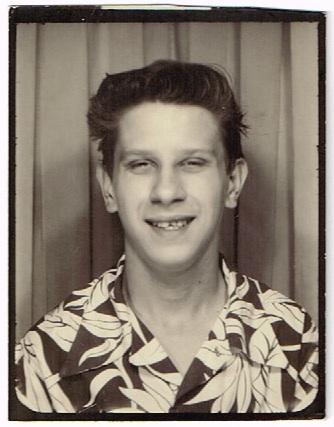 A bit older and no longer worried about his smile, but maybe he should have reconsidered that shirt? 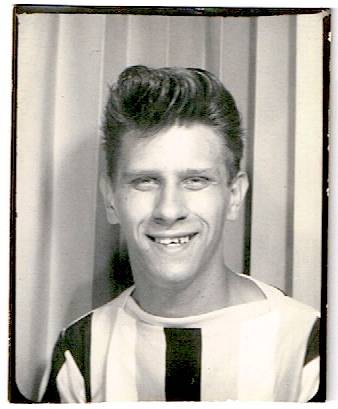 Older still and more confident but there is something missing in his life . . . 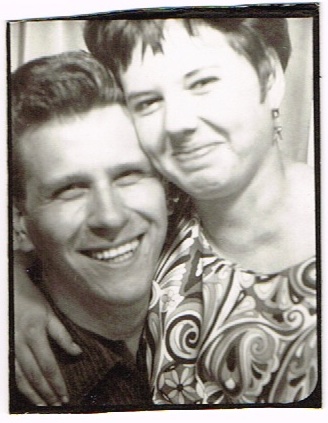 It is amazing what a new set of teeth will do for a man!

This strip is another gift from my friend Ted in the USA. Since we met through our respective blogs, Ted has been very generous in his gifts of unique and interesting booth images. I’m so grateful to him and feel a flutter of joy each time I pull out the things he has given me.

Using the clothes and hairstyles as my guide, I would guess these images date to the late 1930s or early 1940s. It is quite unusual to find a strip from this era that has not been cut into individual frames. In the early years after its invention, photobooth machines were mostly situated in shops that offered other photobooth related photography services, such as enlargements, duplicates and framing. The machines were operated by an attendant who directed the poses. Once the photos were developed and dry, they were cut and placed in an envelope for presentation to the customer. There were eight photos to a strip.

You can see that these images have been taken with the help of an operator. There is none of the random squashing-in you see in later photos when the booths were unattended. The three ladies have been carefully directed to their respective positions allowing for no part of their faces to be obscured. In the first two frames the direction was to look left, the next to look right and the final one to look ahead. Whether or not they followed the instructions is another matter! I love the subtlety of the changes in each image, particularly in the eyes. They give the pictures a lovely gentle, and warm atmosphere.

There are some lovely details in the clothing and accessories worn by these three women. The woman on the right has a magnificent brooch in the form of a butterfly or bird wings at her throat. The huge buttons on her jacket look metallic in their shine. Maybe they have a gilt finish? The lady on the left is also wearing a lovely piece of jewellery in the form of a large sparkling pendant along with a matching sparkling hair clip. The ruffled collar of the lady who is sitting in the middle could be hiding some more jewels.

Below are some links to other posts that feature photos of Ted or relate to Ted in some way. Enjoy! 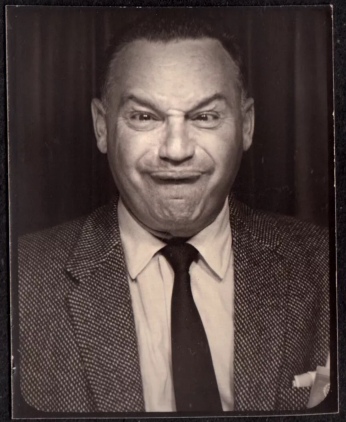 I just couldn’t pass up the opportunity to buy this extraordinary photo. Perplexingly, no one else wanted it. Is that strange, or am I?