Merry Christmas and a Happy New Year to one and all.

Thanks for visiting and liking my blog!

Once again, Merry Christmas and a Happy New Year to everyone. 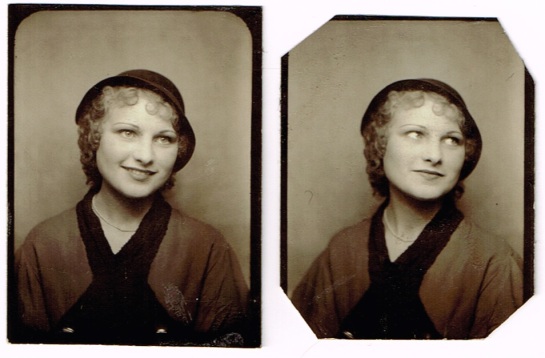 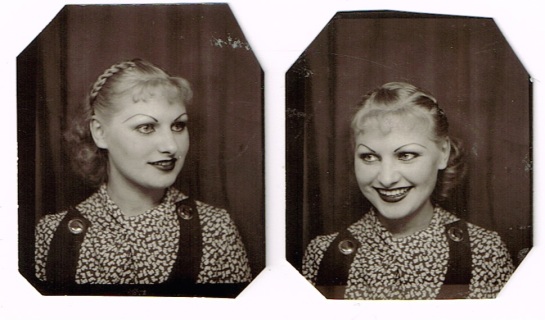 This is Catherine. Catherine comes from the USA. She was very curious about the new Photomaton machines she had read about in the news. When the first booth arrived in her town in the mid 1930s, she was one of the first to try it out. Each year, on the anniversary of her first visit, she would sit for a new strip of photographs. She added them to an album, where she kept a page especially for her booth photos.

Catherine was sweet on a boy when she was 18 years old. She had a photobooth portrait hand coloured to give him, but being shy, she lost the courage, so ended up keeping it for her album.

At the age of 20, sick of her lack of confidence, she decided to try a new look. Her dad said she was a beautiful young woman who had sabotaged her looks with those dreadful eyebrows, heavy eyeliner and dark red lipstick. Her mother said, “It is the fashion, dear. Let her be.”.

If anyone can work out what Catherine’s surname is, please let me know. I have tried many combinations of letters but none of them come up with a name recognised by any of the genealogy sites on the net.

I love his terribly serious expression and crooked tie.

This is a special item in my photobooth photo collection. It is always great to get a pic with an ornamental frame, even better if the frame is dated, as is this one. Making this photo even more special to me, is that it is accompanied by a detailed card that identifies the sitter, the event and the sitter’s status at the event.

On top of all that, I found inside the holder for the card, a fragment of newspaper (below) that tells us that chair-pushers had to pay for their own uniforms and that they were paid $0.30 per hour, being an average of $10 per week. Even in 1933 I would imagine that was not great pay. Given that Karl kept that bit of news, one could conclude that he was employed as a chair-pusher at the event.

The Century of Progress Exposition ran in Chicago for two seasons from 27 May, 1933 to 12 November, 1933 and from 26 May, 1934 to 31 October, 1934. Originally intended to showcase Chicago’s past, the exposition came to symbolize hope for Chicago’s and America’s future in the midst of the Great Depression. I imagine the job opportunities for young people this event offered, might have been one of the few prospects they had of getting employment during this difficult time.

Using my less than proficient search skills, I managed to find a US census record for 1940 that names a Chicago resident, Karl Ek, who was born in 1914. It could be the same Karl, as from the image he appears to be in his late teens or early 20s, fitting in well with the date of the photo. Interestingly the Karl named in the census had a sister named Winifred who was also born in 1914, making it possible that this Karl was a twin. The actual birth dates including the day and month were not listed in the report I found. If not a twin, one could imagine that he had a very fertile mother and an overly eager father. Or a very fertile father and an overly eager mother.

The card in its folder. It is embossed on the front with the title of the event. Unfortunately it wouldn’t scan well.

This battered example of a photobooth photo has great appeal for me. It puts me in mind of a Marx Brother’s film (any one of them, really), where an unbearably posh woman is ridiculed and tormented by Groucho, only to fall for his charms. She is the straight ‘man’ to his clown.

Who are these two and what was the occasion that took such an unlikely pair to a booth? Her face is rounded and attractive. She appears to me to be gentle and motherly. She is wearing a fur trimmed hat and a fur collared coat, set off with a collection of large costume jewels. Why is she with this, possibly drunken, sailor?

I have no idea about naval ranks, but isn’t this the uniform of a very young seaman? He looks way too old to be in this outfit. So was this a fancy dress party?

I cannot figure these two out. I love them nevertheless.

This utterly gorgeous booth photo was one that got away. (Melodramatic sob!) I don’t have any photos of Father Christmas in a photobooth to call my own.

So what do I want for Xmas this year? You guessed it! You have to have a cool US $100 or more to buy one of these rarities on Ebay.  I will forgive you if you don’t buy me one. 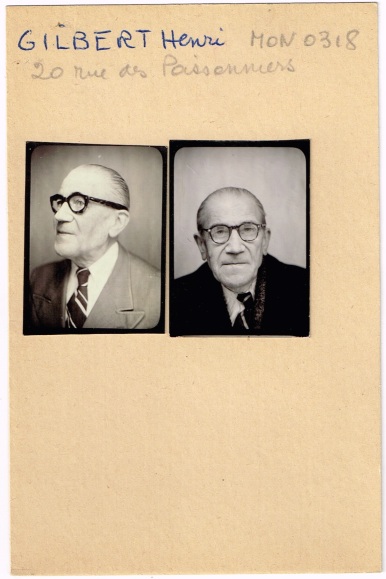 This is Henri Gilbert. He is looking for acting work in roles such as;

He has been waiting all his life for his big break. He doesn’t realise he grew old whilst waiting.

This is one from a group of file cards from a Parisian acting agency. The back of the card is blank. According to the seller, none of the actors in the cards I procured, ever made it big in the acting profession. The ones that did, were too expensive for me to buy!

There are some wonderful photos in this series, so stay tuned to Photobooth Journal for more updates 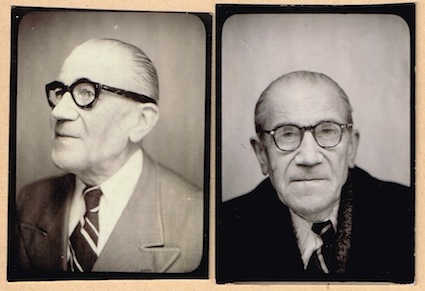 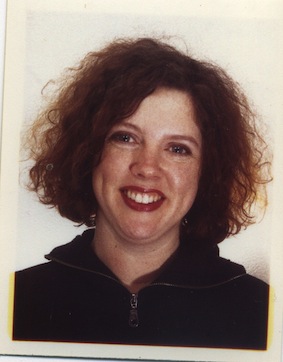 This is the second of two photo strips taken for the purposes of teaching agency identity cards. I cannot find the card, which is unusual for someone as obsessive about photobooth photos as I am.

This strip was also used for a travel identity card (below).

While working in the UK I applied to and worked for two different teaching agencies. The first one, Protocol, was sending me to some ghastly institutions. I hoped for better with Select. As it turned out, it was mostly ghastly schools that needed emergency teachers, so nothing much changed.

This group of photos comes from my series Photobooth 41 Year Project. You can see all the posts that document the series by clicking here. I am still adding to this project using mostly digital booths to create the images. 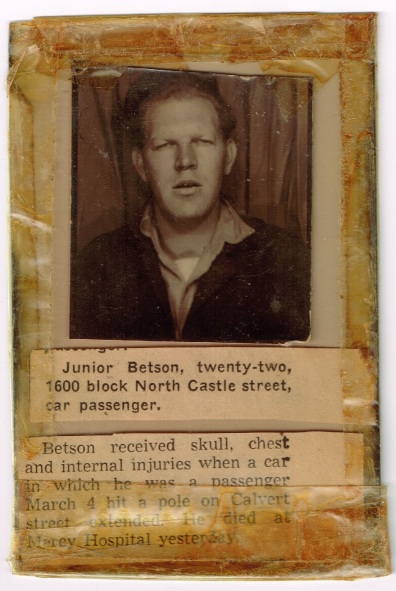 There is a certain amount of melancholy in old photos of any kind – the subjects may now be dead, now older and less able, now older and less attractive, at places that are no longer recognisable or for countless other reasons. For photobooth photos the melancholy is in all that, plus sometimes in the mystery of how such photos (particularly more recent ones) find their way onto web auction sites.

This is definitely the most melancholy of all the photos in my collection. Someone has created a personal in memoriam card from newspaper clippings, a piece of clear plastic and a photobooth photo.

According to a local newspaper from Hagerstown Maryland, The Daily Mail, (dated the 12th of March, 1956, page 2), Junior Betson was the third fatality in what must have been an horrific accident. From the information above, his injuries were extensive. The incident took place on the 4th of March. He managed to hold on for seven days but died on the 11th.

To me Junior (he was never meant to live long with that moniker, was he?) looks older than his twenty two years. He appears to be a Rebel Without A Cause in attitude, hairstyle and dress. Maybe it was a drag race or some other testosterone fueled stupidity that caused the accident. Maybe it was just an unfortunate mistake with a stop sign or red light being missed. I hope he managed to pack in a lot of great living into those few years.

While working in the UK I applied to and worked for two different teaching agencies. These duller than dull photos were taken for an identity card (see below) for one of the agencies, Protocol Teachers.

This group of photos comes from my series Photobooth 41 Year Project. You can see all the posts that document the series by clicking here. I am still adding to this project using mostly digital booths to create the images. The project is now close to entering its 44th year. Could it be the world’s longest photobooth project?

An unsual pose for an unusually beautiful child.

A photobooth photo from Germany. It was probably taken in the 1930s.