While living in Leicester I made the most of its proximity to London by visiting there as often as I could.

This photo strip was taken at Leicester train station when I was on my way to my cousin Rachel’s home for a fancy dress party. I hasten to add that I was not in costume for this photo strip.

The last photo in this strip is one of my favourites.  I was trying to emulate the reproductions one sees of movie stars’ high school yearbook photos – daft and self-conscious. I think I did it really well.

Many of the photos in this long series are unremarkable. They make up a photographic album of my adult life, which gives me a lot of pleasure as I add each new photo to the collection. I also love the memories they bring back, when I write about them for this blog.

This strip of photos comes from my series Photobooth 41 Year Project. You can see all the posts that document the series by clicking here. I am still adding to this project using mostly digital booths to create the images. The project is now close to entering its 44th year. 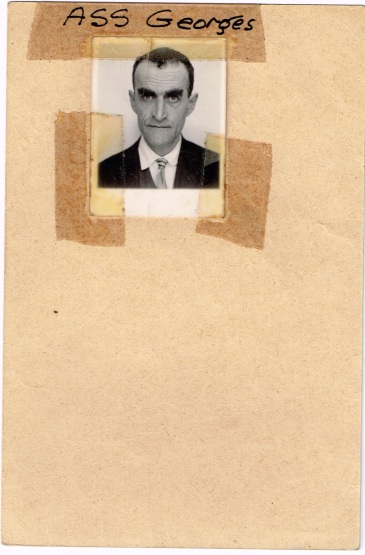 An enlargement of the photobooth photo is at the bottom of this post.

Here is another Parisian actor’s file card from the 50s or 60s for your perusal.

Poor Georges. He looks scary, right? He has a face and eyebrows made to play a supernatural villian, like Count Dracula or other type of ghoulish creature. He also has a name to play a bad guy. Bad-ass George Ass. Apart from having such a wonderful face, I couldn’t pass up the opportunity to have a photobooth photo of someone so quirky, who also has a listing on the IMDb. Wow, a real actor for a change!  What? You didn’t think I bought the card solely due to his funny surname? Preposterous!

Unlike some of the other file records from this agency, there are a lot of details listed on the back of this card. (See below). He lived at 291, Rue St Denis in the 2e arrondissement of Paris. He was born on the 14th of September, 1909, making him between 45 and 55 years of age at the time this image was made. He had grey eyes and dark brown hair. He was long and slim at 174.5 centimetres tall, (5 feet 8.7 inches) and weighing only 65 kg. Even more perfect for a role as a vampire, I say. In addition to his native tongue, he spoke Russian (good for Cold War villian roles) and had some English. His sporting interest was cycling.

Poor Georges had some minor roles in film but the closest he got to getting a role that really suited him, was when he played a prisoner in Paris brûle-t-il? in 1966. Alas, from there it was downhill all the way. He was a priest at a funeral in Borsalino in 1970, which was definitely a sombre role and could be regarded as slightly macabre, I suppose.  He then played a deacon in Doucement les basses in 1971. A corrupt deacon, one hopes. He had an uncredited role as a man on Rue des Rosiers in Les Aventures de Rabbi Jacob in 1973. I like to imagine him breaking windows or vandalising something in that bit part. Unfortunately for Poor Georges, his next and final credit was as a seated man. We can only hope that he was a bad-ass seated man!

There are some other great photos in this series, so stay tuned to Photobooth Journal for more posts. 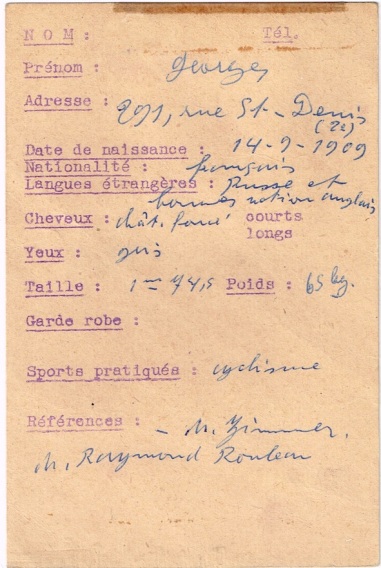 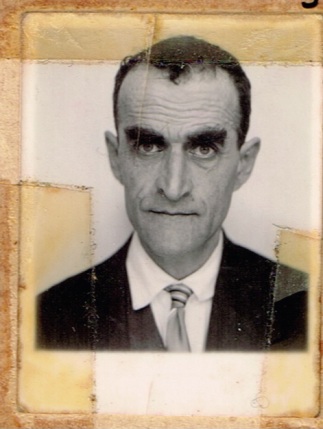 Here we have two cheeky little misses. The booth chair being too low, makes them appear to be very, very small and almost pixie-like. Adding to that impression is the goofy gap-toothed smile on one and the cute freckles on the other.

With two similarly, badly cut fringes, (“Gee, thanks Ma!”), I would suggest they are sisters. But of course they could be best friends with a penchant for playing hairdresser with mummy’s dressmaking scissors.

This strip is from the USA and probably dates to the late 1960s or early 70s.

When I was living in Guatemala, my companion and I boarded with a local family who took in travellers from all over the world. We met some fabulous people and some peculiar ones. We learned to be wary of a very odd young lady, who amongst other unusual habits, would offer her hand to recent arrivals and ask them to “sniff this”. It was invariably at breakfast time, after she had just emerged from her bedroom, so the offer was usually brusquely and firmly refused.

So has the gentleman with his bodgie hairstyle, (look it up, those of you who don’t come from Oz) proffered his hand for a good sniffing, or for a strangely ardent kiss? The photo is so funny and weird. What do you make of it?

The photo was from a Serbian seller, so I hope it is from Serbia. It was taken in Hagen, Germany, in December 1964.

(Update 19 August, 2016) My thanks to Peter from Documenting the Obvious for working out where this strip was taken. 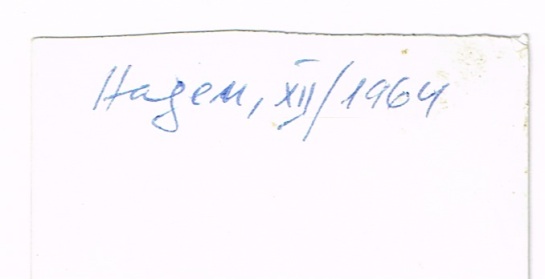 Someone has kept these two battered and dirty photobooth photos side by side for a long time, possibly in a purse or wallet. They found their way to a US flea market in unison, too.

With no information on the backs, these photos could have been taken anywhere, but the uniform of the soldier and the style of luxurious, tumbling curls of the young woman mark these as having been made at a particular time; WW2. There is a melancholy look to their smiles. Was it a wartime romance cut short by an imminent departure for duty, perhaps?

It is cute that they both blinked at the same time in the second image. It gives the impression that they are both meditating on their love, sending their thoughts to each other through their heads-together embrace. You can see the soldier’s hand at bottom right of each image, holding his girl tight. He never wanted to let her go.

I hope it wasn’t just the photos that remained together. Now that these photos are mine, I can guarantee, that at least in these two dimensions, they will never be parted.

This is a very special post of photobooth photos from one of my blog readers, Sherri. I have tried to present this story mainly in Sherri’s own words.

“My love for photobooth images comes from those that I have of my mother.  She was killed in an auto accident when I was just 7 months old, so all I have of her are photos, no memories.  My favorite photos of her have always been the photobooth strips.  It may sound silly or strange, but I feel like they are the next best thing to having a memory of her.  In those strips, I feel like I can feel how she was feeling in the booth, trying out poses, smiling, laughing.

They are all attached to a page in my baby book. (See the full page, below). There are also booth photos of my maternal grandmother (who, by the way, is the person who raised me after my mother’s death).

I found a note in the baby book telling that the photos taken in July, 1967  in a Fort Wayne, Indiana KMart store.  The other booth images would also have been taken in Fort Wayne, Indiana, but I can’t be sure of the store.
My mother was Grace Charline (nee Henshaw) Sloan, born December 26, 1949 and died October 7, 1967.  My name is Sherri Lynn and I was born March 5, 1967.  My grandmother’s name was Mary Louis (nee Shenfeld) Didion, born February 6, 1925.” 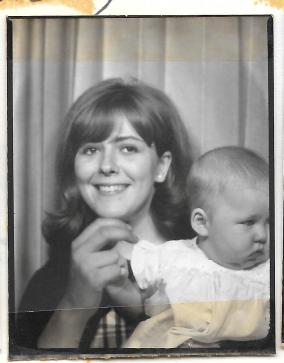 Sherri has a wonderful vintage photo blog The Rescued Photo, which I encourage you to visit. She meticulously researches the lives of the sitter/s from any scant detail she can glean from a scribbled name or note. Sherri’s philosophy about blogging is closely related to her feelings about her photobooth photos of her mother – that the story behind the images allow the person, or people in them, to live on.
Most unusually and unselfishly, Sherri will give the photos back to family members. However it is not always an easy process.

“I  hope that someday relatives will find my posts.  So far, I’ve only located one relative of a photograph but not one I’ve blogged about. They said they would love to have the photo and would send me their address, but they never did.  I followed up once and still didn’t hear back.  I noticed they’re using the photo in their ancestry family tree, so maybe the digital copy was enough for them.

I did find a home for the most recent photo I blogged – Orlo C Mathews and his brothers.  Orlo is the survivor of the Sultana maritime disaster. While researching him, I discovered a book he owned (about the Sultana) is housed in the Bedford Ohio Historical Society Museum.  I contacted them and they are excited to add the photo to the book.  Imagine how much more interesting it will be for people to be able to see a photo of the man who owned the book and survived the disaster!  I’m so thrilled with how that turned out!  I hope to have more of those moments!

Just like my blogging about photos I find, makes me feel like I’m helping the people in the images to live on, I feel like that’s what you will be doing for me by blogging the photos of my mother.” 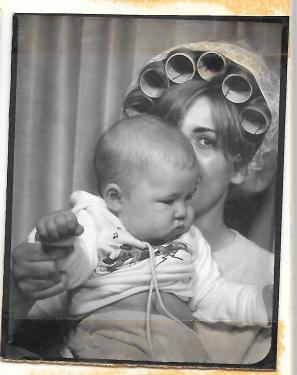 Sherri with her maternal grandmother, who raised her.