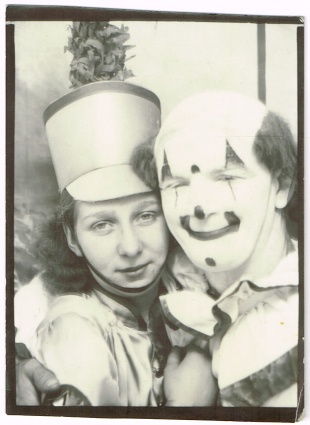 Yo Yo (Bill Alcott) is seen above with a Majorette, which I have just discovered is an American term for a baton twirling marching girl. In Australia we have a different name for this type of performer. We call them  Baton Twirling Marching Girls. Not much linguistic creativity there, Oz! The above souvenir photo is one of many I have seen on eBay, in the past two years or so, where we see Yo Yo posing with a visitor to the carnival or circus. The above photo is the only one that shows somebody in a costume that indicates they were also performers at the event.

My scanner has failed to capture how wonderful this photo is.  There is a depth to the photo that is not visible here. Our marching girl is beautiful. She looks serene and comfortable getting a hug from my favourite clown. I wonder if they were friends?

Below are more photos of Yo Yo with circus goers. Unless otherwise indicated, I do not own them, but copied them from the eBay listing when they were sold. 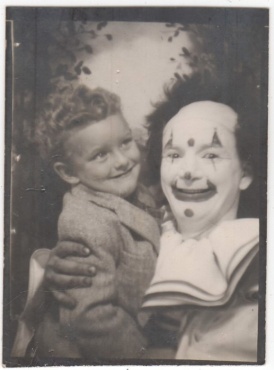 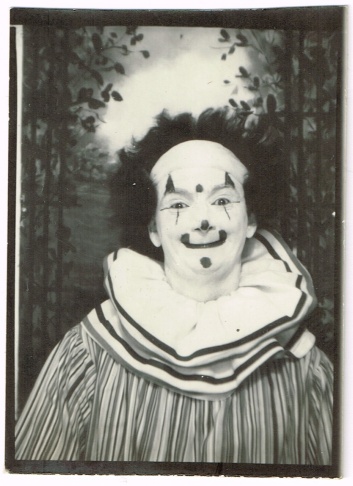 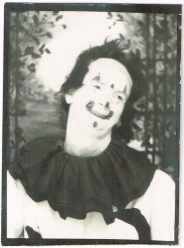 I have published photos of this clown before but at the time I knew nothing about him, except that he kept popping up in online auctions in photobooth photos. I am happy to say I now know that this is Yo Yo the clown. Of course he was more frequently known by his birth name, Bill Alcott. I bought this and most of the photobooth photos below from his daughter, Arlene Albrecht. She has so many souvenirs of her own and her father’s career in the circus that she was happy to part with these small items.

Bill started clowning when he was 5 years old as his uncle was a strong man in the circus. He performed well into his 70s. When Arlene was a child she travelled and performed with her father in Jay Gould’s Million Dollar Circus. The circus had a carnival, so it was a complete package for state fairs & other community celebrations. Arlene’s mother had a photobooth and her brother had a slum spindle (which I believe is a game designed to favor the owner, not the player) on the midway. Later the family added snow cones & cotton candy to the business.

The photobooth was very popular during the second world war as all the girls at home were sending pictures to their sweethearts in the military. Their photobooth was a great feature, for children and adults alike, to get a personalised souvenir of the circus. I will post some of that type of photo soon.

It is interesting that his advertisement for work mentions that he was sober. Taking one meaning of the word, it is hardly appealing to employ a clown of sober mood. Taking the other meaning of sober, which is obviously the one intended, one wonders if there were so many drunken clowns in the business, that it  was necessary to specify that detail. 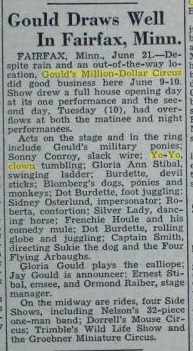 The photos below are copyrighted to Clown Alley. I asked for permission to use them but didn’t receive a reply. I hope using them will not upset anyone.

St Louis Police Circus 1956. Yo Yo is the second last clown on the right.

Yo Yo in colour, cuddling a Policeman clown.