Ch-ch-ch-changes! This is why I love a series of photobooth photos of the same person. No other type of informal photography gives as much consistent detail of a changing face, but why oh why did this childhood collection end up on public sale?

My love to Donna and her friends. I hope they are all still with us.

To see the complete series of Donna’s growth from child to adult, please click here.

Above is the last of the photos of Donna in a photobooth with a friend. This time we have Jay, who could be another of Donna’s boyfriends. To me, they seem more like good pals. If a boyfriend, it is unusual that they are not kissing, given her love of a smooch in a booth.

Below we have the last of Donna’s friends or perhaps relatives. The way the notes on the back of each picture are written, makes it unclear whether this girl is named Sister, or if she calls Donna Sister as a nickname or is in fact her actual sister.

The writing on the back is also the only indication in all of the photos, of our blond beauty’s name. As they all came from the same album, I felt it reasonable to assume the notes were addressed to the owner of the album. The person most frequently featured, who is referred to as me in many of them, being the most obvious candidate as the owner. 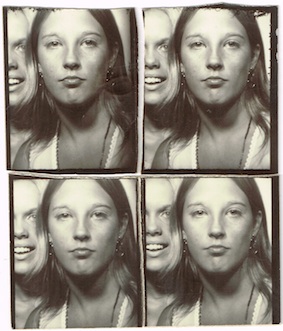 This is the penultimate installment in the Lori and Me series. As we get closer to the end, I am getting more and more confused about how to group the photos. The top four of Donna and Lori were taken on the same day as the first strip shown in Part 7. However, they are from a different booth that produced miniature, stamp sized photos. Each of the above photos is dated 1972, so I decided to group them with other miniatures of Donna’s friends.

I have enlarged the last picture of Lori and Cheryl to help you to see the detail of Cheryls extraordinary eyeshadow. Although it looks white in the pictures, I imagine that being the 1970s, it would have been a very pale green or pale blue. I think it looks very cool.

In the seventh part of this series, we have Donna on two different days with two friends. Each photo is dated 1972.

For those of you who remember, I named this series after one of the inscriptions on the back of one of the pics. For a long time I had it in my head that Lori was the blonde star of these photos. I decided to name this large group of pictures after her, despite my mistake. So, here at last and in the top three pictures, is the “Lori” of the title. Ted, one of my friends, will be pleased to finally see her!

In the second two photos, unfortunately faded, we have Donna and Mona (who we saw before in Part 4) and “Steve’s finger”, that being the cigar-shaped shadow at the bottom right of the second image. Not sure who Steve is, but he is obviously important enough to have his finger mentioned!

In this sixth instalment of this series, we have Donna looking very beautiful and all grown-up.  These two strips were taken on the same day in 1972 at a beachside town, given the inscription on the back, which says Me at Beach 72.

Donna looks so much older than in the last photos in the series, it is tempting to say this is several years after they were taken. However, I think there would have been no more than 12 months gap between the sittings, judging by the dates on some of the other photos from the album.

For those of you interested to see “Lori” of the title of this series, the big reveal will be in the next post.

Donna is photographed with many boyfriends and girlfriends over a period of 4 years from 1969 to 1973 in a large series of photobooth photos. To see the rest of the posts in this series, please click here.

END_OF_DOCUMENT_TOKEN_TO_BE_REPLACED

In this fourth instalment of Lori and Me, we have Donna in a photobooth with two friends. None of the photos identify any of the girls but one friend, Mona, is identified in later photos from the series. Comparing these to the previous post, Donna is again looking slightly older and in my opinion, she is becoming more and more beautiful.

All of these photos were taken somewhere in the USA but none of them are dated, unlike others in the series.

Donna is photographed with many boyfriends and girlfriends over a period of 4 years from 1969 to 1973 in a large series of photobooth photos. To see the rest of the posts in this series, please click here.

Donna and unidentified friend (with Mona in third photo)

In this third instalment of Lori and Me, we have blondie Donna in the photobooth with two unidentified people, one of whom could be her mother, or the mother of the other young woman. Donna is looking more mature in this set, as is her friend who was pictured with Donna in the previous post in this series.

I think it is a great group of fun photos. Shame about the older woman who seems to think she is one of the teenage girls. For some reason she REALLY irritates me. I normally refrain from saying anything negative about the people in my photos, mostly because I don’t have anything bad to say about them, but in this case, urgh!

All the photos were taken on the same day somewhere in the USA. Unfortunately, none of them are dated.

To see the rest of the posts in this series, please click here.

In this second instalment of Donna’s photobooth story we see her above, with two unidentified friends in a strip that was over-exposed due to the over-close proximity of the two faces at the front, to the flash.

While the quality of the strip isn’t great, it is part of Donna’s story and charming for the joy these girls exhibit in each other’s company. I love the typical 1970s haircuts on all three of them. Having been a child of the 70s and endured this type of “do” myself, I hope this fashion will never, ever be repeated!

The photos below, came from the same album in which Donna had mounted photos of herself and her friends. I would assume that at least one of these boys is a younger brother to her. I do love the Sharpie haircut on the boy at the back but then again could it be a girl? Sometimes I feel so clueless on gender identification!

Donna is photographed with many boyfriends and girlfriends over 4 years from 1969 to 1973 in a large series of photobooth photos which I will continue to share with you in the coming weeks.

On the back – “…over cute in all these pictures” 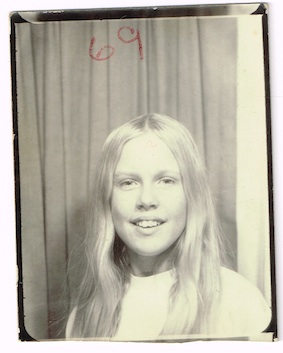 This bubbly young woman is probably named Donna although that piece of information has been deduced from a single dedication on a photo, presumably given to the owner of the album from which all these and many other photobooth photos came. She is identified only as “me” in the rest of the pictures. Given the vagaries of this process of deduction, it may not be the name of the girl who most frequently appeared in the album, but I think it is likely, and thus she will be Donna to us.

Donna is photographed with many boyfriends and girlfriends, over a period of 4 years from 1969 to 1973, in a large series of photobooth photos which I will share with you in coming weeks.

For me, finding a series of photos of the same person over a period of years, is one of the highlights of collecting photobooth photos. It is particularly fascinating to see someone, in the formative years of their life, grow-up before our very eyes.

As with another long series that I posted last year, Becky and Friends, I will be adding highlights of this series to my Photobooth Time Machines category. In the category files, each post is shown in reverse order of date of publication, so to see the photos chronologically, you need to start at the bottom of the page and work upwards.

In this first instalment we have blondie Donna in the photobooth with friends Carlos and Bessie. All the photos were taken on the same day in 1969, somewhere in the USA. 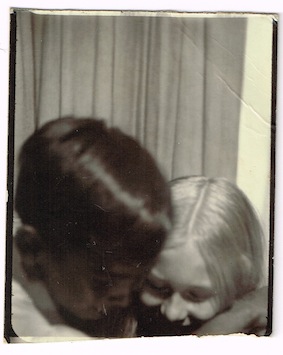 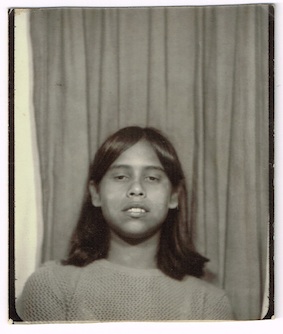