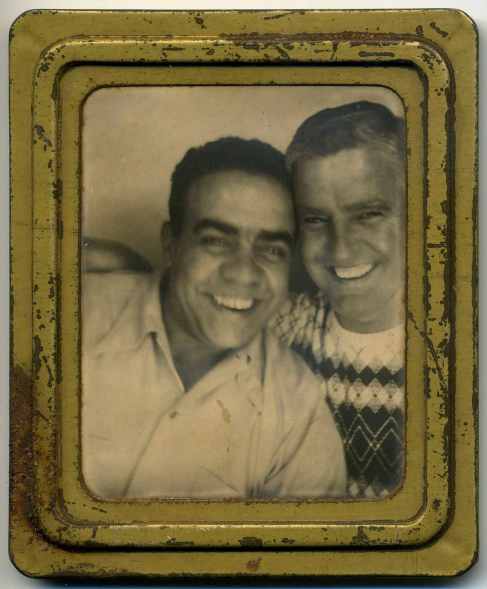 This fabulous photomatic booth photo of what appears to me to be a father and son, was listed as a “gay interest” item in its online advertisement.  I find this type of description interesting and confusing. If any photo has two men in it, looking happy or like they may be good friends, online sellers love to throw in that tag. Similarly the “lesbian interest” tag is often used if two women are depicted. Why do we never see “straight interest” listings? Do gay/lesbian people search for the “gay/lesbian interest” tag? If they do are they horribly disappointed with what they find?

Scott Davis from dcphotoartist has looked at this issue in an eloquent article, some of which is quoted below. One of Scott’s collecting interests is cabinet cards of the Victorian Era.

Another marketing trend I find a bit odd is the whole “gay interest” tag in the image description. On one level, I get it – the seller is trying to reach out to an under-appreciated market. On the other hand, I question if the people using that tag line understand the “gay interest” thing at all. Two men or two women posing together in the Victorian world did not make them a same-sex couple. They could be siblings, co-workers or just friends. 99% of the time we have zero context to go with any image to make an assessment of the relationships captured in the images. There was no public subculture in the 1850s or even in the 1880s that we would today recognize as analogous to the late 20th/early 21st century gay culture, and as such it would not have been recorded photographically. There is certainly an interest in finding proof of ancestry – “see, we DID exist in the 1850s”. Unfortunately, buying in to the “gay interest” marketing of these images is really just being taken for a ride through ignorance and vulnerability. Don’t get me wrong – it’s certainly fun to speculate what might have been going on behind the scenes of these pictures, and what the relationships of the sitters might be to one another. I have one image in my collection that in the right minds implies no end of off-camera highjinks. But it’s still pure speculation. If you see an image marked “gay interest”, buy it only because you actually like the image, not for any marketing baloney designed to separate more of your hard-earned money from you than is fair.

I would argue that these points are equally relevant for many photos up to the 1950s and beyond. In another article Scott continues –

The “Gay Interest” label is a purely 21st century invention for marketing purposes, imposing our sensibility on an image of something that may (and quite probably) have had nothing at all to do with the modern sensibility. It points out a very interesting problem/characteristic of the malleability of truth – there was a “Truth” behind each of those photos, one we can never know because it was unrecorded or became detached from the image. When we come along years later and invent or imagine a story revealed by the image, is it any less real than the story the image intended to tell at the time of its creation? It certainly says more about us in the 21st century and how we interpret these images than it does about the people in them, but in doing so, does it actually help make the images more relevant and meaningful, and continue their survival?

Please click the links above or here to visit Scott’s blog. He has some fabulous ideas and images to share.