I bought this as a German drivers license but it is actually a monthly rail pass.  As it was very cheap and collected solely for the photobooth photo, I was not at all concerned to find out it was not what it was advertised to be. It came from an Australian seller, which is most unusual when looking for photobooth related items.

The pass was issued in Duisburg which I find amusing, as the only previous encounter I have had with the name of the town is through the British comedy series The League of Gentlemen character, Herr Lipp. He was a disturbing person from the same town, who was repulsive, creepy and demanded sympathy at the same time. I hadn’t actually realised it was a real place until I found this item on Ebay. But I digress! The ticket was issued to Fritz Dirske in September 1934, for travel from Duisberg to another town via another place, the names of which I can’t quite read.

The ticket is non-transferable and it says at the bottom that it must be signed in ink with your first and family name. Ticket number DE16 085 is stamped on the holder and written in ink on the pass.

Not visible in the scan, is a mark stamped at the bottom of the metal holder which reads Vermos A.G. Köln 2 DRP. The DRP, or Deutsches Reichspatent, was a “proper” patent, assigned from 1877 until 1945. It seems a simple item to have required a patent, however it is cleverly designed. The ticket slides out of a slot at the bottom of the holder, so is easily changed after its expiration, while the photo id is firmly secured by a large rivet, making it a document not easily tampered with.

This is an example of how quickly the photobooth photo became a ubiquitous means of creating photo identity documents, the Photomaton machines having only been introduced in Europe 5 years previously. 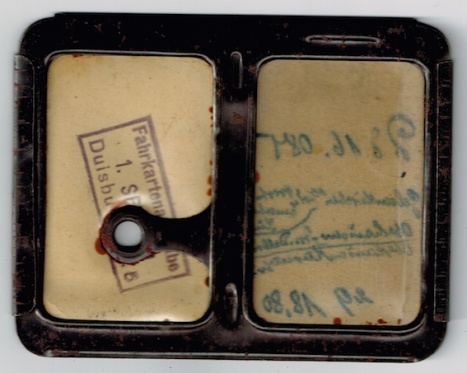 The same holders were still in use in railway identity passes after WW2, as can be seen in the example below. 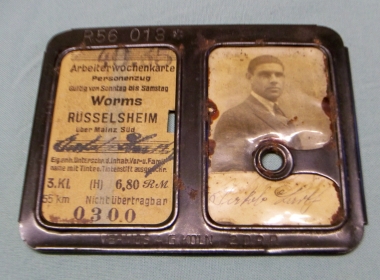