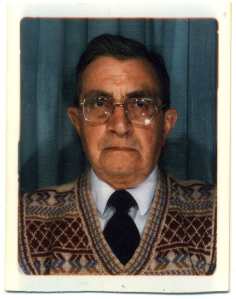 I had met Georges at Del Holbrook’s home on numerous occasions before being invited to visit him at his home at Argenteuille, near Paris. Del had boarded with Georges and his family when she was studying French in Paris as a university student. From memory Georges had taught himself English and though he struggled slightly in speaking, his comprehension of written and spoken language was extremely good. Whilst there, George introduced me to some of his extended family with many compliments at how great my French was after only 4 months of study.  I then proceeded to stumble and blunder my way through a conversation that massacred their fine mother tongue.

George found this recent booth photo to give me after I had presented him with one of mine which I had taken on my way to his place.