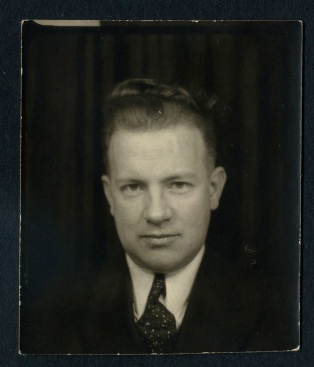 This is Harold who has been separated from an incredible series of photos showing him ageing gracefully from his teen years to late middle age.  These photobooth photos are just a small selection of the series.  You can see the rest by clicking here.

Harold S. Chambers at one time lived in Grand Rapids, Michigan and was an assistant superintendent of schools in Saginaw for 6 years from 1939 to 1945. He then became a full superintendent in Kelloggsville and later Godwin Heights (until 1953). The above photos were taken in the 1930s, the top three in Detroit and the bottom one on another day, at an unspecified location.

These photos were carefully preserved by Harold, or his wife. What happened to the family and how did these and the other photos get separated from them?

Maybe good, hardworking Harold never married and had no children. He was involved in school surveys that resulted in recommendations for school building construction programmes.  Maybe he is remembered in one of the schools he helped to build? Dapper like my Grandpa, of the same era and with the same curly hair he had, I feel very fond of Mr Chambers. I hope he is remembered fondly by someone other than a day-dreaming stranger.