Emulsion is peeling from the surface; there are cracks and tears in the paper. Although this photobooth picture is in very poor condition, as part of a series of photos of a German man over a lifetime, it is important to me to preserve as it shows him at him youngest.

I was in two minds whether to include so many non-photobooth photos here at Photobooth Journal. I would normally link the booth pic to another post of the rest of the photos on my other blog at Mugshots and Miscellaneous. However, I was inspired by a post at Ian Phillips’s illustration site of photos of one young man through various sittings and in various fashionable attire. Whether the images cover a long period of time, as shown here, or a much shorter period there is some fascination in following more than one moment of a person’s life, sliced out of time by a photograph.

Ian Phillips also has another fabulous vintage photo blog called Swimming in Pictures that I highly recommend for a squiz. 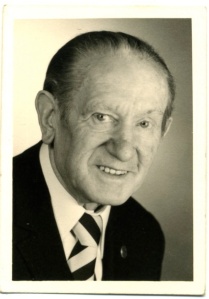