Following on from David Simkin’s guest post of last week, above is the first of a very rare series of eight Photoweigh photobooth photos that I own. I have never seen another long sequence of the same person in this type of machine. I have arranged them in correct chronological order, if they are dated but have guessed the order for the rest of them. They were all taken in the UK. 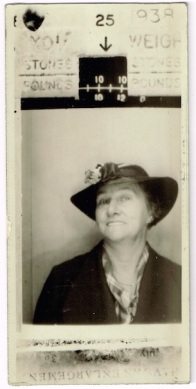 On the back of this photo is written Douglas, June 1939. I have presumed that to be a place rather than a person’s name, based on the inscription on another photo, below. There is a town called Douglas in South Lanarkshire in Scotland and the capital of the Isle of Man is also a town called Douglas. The photo could have been taken in either one of these towns, however, the Isle of Man is the more obvious holiday destination. On consulting David Simkin, he confirmed Douglas on the Isle of Man to have been a popular holiday destination at the time these photos were taken, and therefore the most likely location of the Photoweigh booth.

21st of … Other details have faded.

On the back of this photo is written ‘S.Quinn”, which I believe to be the name of the lady pictured in the series.  As the only clearly dated photos were all taken in June of the various years, I like to think that these were a souvenir of her annual holiday, taken at the same time of the year, in the same town and in the same booth over many years.

Each photo measures approximately 40 x 83 mm and they are all printed on a heavier weight stock than is usual for other types of booth photos, but seems to be standard for Photoweigh photos.

Details of date have faded or it was never dated.