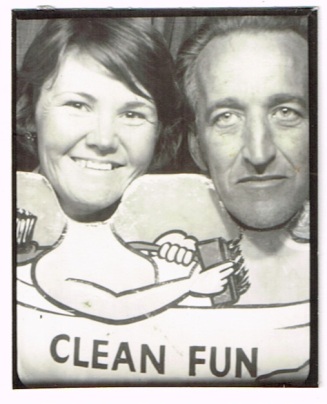 This type of novelty cutout was often seen in carnival photos throughout much of the twentieth century. More often than not, they were used in an onsite studio setting and printed as snapshots or photo postcards. In photobooth images they are very rare and highly sought after by collectors. This is the only one I have managed to procure in 12 years of shopping for collectables online. It comes from the USA.

A booth, located at a fair or carnival, would have offered a selection of boards from which to choose. The customer would have needed to hold the cutout, carefully positioning it to keep both the caption and themselves in frame. This choice seems slightly dodgy to me, given that the couple appear to be father and daughter, but maybe the woman is older than she appears to be?

The photo was once attached to an album page. There was no known provenance as far as the seller was concerned.