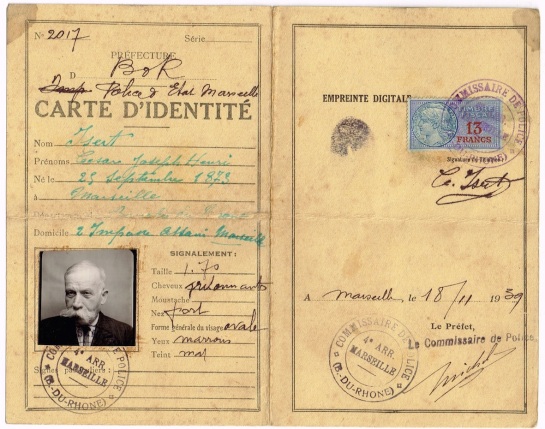 I purchased this French identity card solely due to the wonderful moustache of the sitter. It almost wouldn’t have mattered if it had not even been a photobooth photo, such is my love of his facial, follicular folly.*

So, let me introduce to you Cesar Joseph Henri. I am unable to work out his surname, unfortunately. He was described as being 1.70 metres tall, having an oval face, strong nose and brown eyes. Strangely, his hair is described as grissonant (greying), which seems very polite given that he looks to be well and truly into silver fox territory, and especially strange when they then go on, quite impolitely, to say he has a bad complexion.

Cesar was born in Marseille on 25 September 1873, making him 66 years old when he applied for the card. Marked with the seal of the 4th Arrondisement of Marseille on the 18 December, 1939, one assumes that this city was his lifelong residence.

When it comes to his facial-hair, fashion choices, Cesar looks to have his feet firmly planted in the century in which he was born. His taste for a style of the Victorian era must have been very passé by 1939.

As the title of this post suggests, the size of his moustache makes me think of the elaborate antlers of a mature bull moose. It is known that the size of antlers signals to the female moose, the male’s social standing and breeding abilities. Perhaps, amusingly, this is what our sitter was wanting to project to the female populace of Marseille.

* I just had to throw in the word folly, as fellow blogger Melinda Harvey and I have decided it is a marvellous word that deserves greater quotidian usage. I felt I needed to throw in another of my favourite words, quotidian, just ’cause I could. Please take a look at Melinda’s blog, One Day/One Image, if you love contemporary black and white photography. You will not be disappointed.