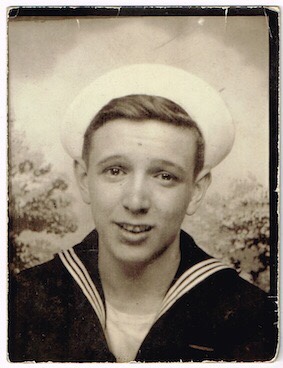 In my previous post, I published a gift from Brian from Equinoxio, today’s photo was a gift from Shayne of Captured and Exposed blog. As I’ve said before, the generosity of the blogging community never ceases to amaze me. Thank you to Shayne, Brian, Ted and others for their kindness in finding and sending me wee treasures.

I’m probably just getting old but Bobby here, looks way too young to be in uniform, especially during wartime. His name is written in ink on the back of the photo and lightly in pencil, someone has added WW2. He is a sweet looking young man with those heavy lidded eyes and slightly crooked front teeth.

His expression is somewhat bemused, as though he barely knows how he ended up in uniform. He could easily be as young as 18. How do we, as a community, still allow children to make the life and death decision to go to war? Is it truly an informed decision if it is made before the consequences of which, could possibly be fully conceived? We now know that brains are not fully developed until the age of 25, yet we still send our young men and women into conflict zones at much younger ages. And then, at least as far as the UK, Australia and the US go, we don’t properly look after their needs on their return home.

Bobby has unleashed some powerful emotions for me. I do hope he returned home after his tour in one piece, both physically and emotionally.