These are the last two images I have of Ray. We have seen him develop and grow from babyhood to adulthood in 134 frames. Happily for me, you have taken him to your heart as much as I have.

Included in this large lot of photos was one three-photo strip of a middle aged lady, called Millee. (Below) Her name is written in the same hand writing that appears on the backs of most of the images of Ray as a teenager and adult. I have no doubt that these photos are definitely part of the family collection.

As no mother appears in any of these strips, perhaps Ray grew up without a mum? Whether through divorce or death or perhaps through a dislike of having her photo taken, she is an absent figure. So perhaps Millee was the important motherly figure in Ray’s life? There could be a resemblance to Ray in her features. She could be his mother, I suppose, but to me she looks rather too old to have been a mum to a 16 year old in 1975, when this photo was taken. She could possibly be an aunt or Ray’s grandmother? Perhaps a nanny or housekeeper to Ray’s father?

It is likely that we will never know the full story, but if someone who recognises Ray stumbles on this blog, you will be the first to know.

Our little boy is growing up! I am guessing Raymond would have been around 16 in the first two strips. He is rapidly putting on weight as we see him age. Too many hamburgers and hot chips, eh Ray?

I don’t think this moustache suits him at all!

So the mo is a no-no on its own but I do like the beard. Not sure about the quiff but that has never been a favourite of mine in men’s hairstyling. 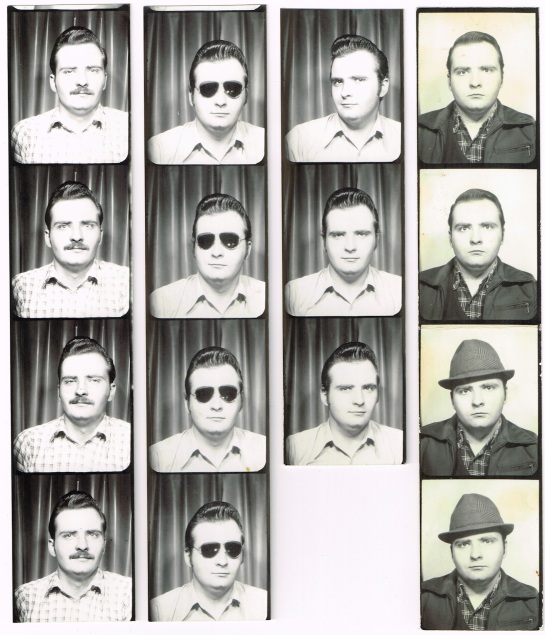 Ugh, that mo is back, but not for long, as he goes all rock ‘n’ roll with those sunnies and then he turns 1950s country squire in the last strip!

I’m almost finished showing you the pictures I have of Ray. There is one more post to come. I love this series for the changes in his face over time but I have barely touched on what he is wearing or his expressions, which have their own stories to tell. I will leave that to you this time.

As with all the photos I buy, I wonder why they have escaped their homes and ended up for sale online. Individual photos are not such a mystery, as they were often given to relatives or traded with friends. Later generations could easily be left looking at dozens of photos of people they have never met or even heard of. Why not sell them off? But when a large series, like this, ends up alone in the world, I feel there must be a tragedy in their past. In the happiest of circumstances Ray should certainly still be alive and his dad would also have a reasonable chance to still be living. But if his father was the custodian of these images and then passed away, why did Ray not value them? Had he a falling out with his father, so wasn’t there when he died, and wasn’t involved in the tidying up of his estate? Did Ray die at a very young age, so when his father passed, there was no one close enough left to want the collection? So many questions!

I suppose there might be a tiny chance that someone who knew Ray Parker and his dad might stumble across these photos and be able to fill in the blanks. Lets hope so. 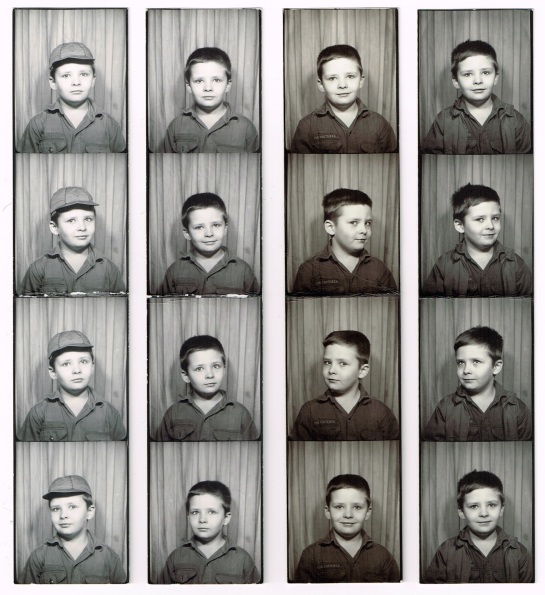 I was thrilled with the comments the previous post received. I’m happy to be able to add more photos to this series, as wished for by Roberta M (please visit her blog) and others. This is the busiest phase of the series, with there being some photos as close together as a week, yet as far apart as almost five years. 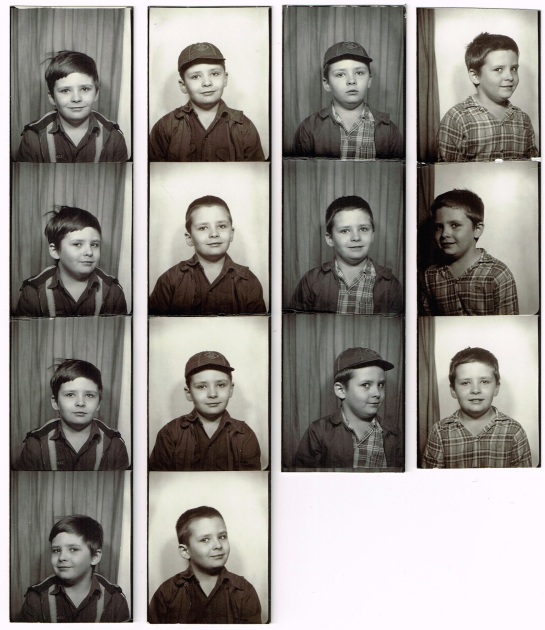 Ray is a cheeky, cutie, don’t you think? My favourite strip is the one, below, where he has had a fight with a lawn mower, yet is still happy to show off the results. 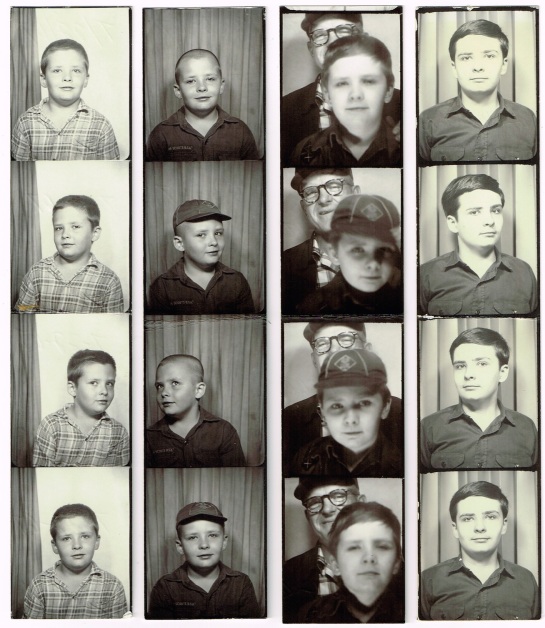 This is the last time we see Ray’s father. He is still hiding there, in the background. Ray changes a lot in the last two strips, but why the long time between sittings? Were some photos lost? Perhaps, but one may surmise that around the age of eight, Ray had had enough of being photographed for his dad’s amusement and point blank refused to cooperate any longer. Or maybe they moved house and were no longer in close proximity to a booth? Whatever the case, with a leap in his growth and maturity, after five years, Ray restarted his father’s project alone.

This is a long, extraordinary series of photos of a young American, Raymond Parker, from babyhood in 1961 to . . . well, we shall see. Many of the photos are dated but none indicate where they were taken. Some include a, mostly hidden, father, but generally Ray is on his own. There is a progression through his childhood and through changing fashions. There is one strip of a lone woman included with this group but no sign of a mother at any stage.

I do love a series of booth photos showing a person at different times in their life. This group is my largest collection of such photos.