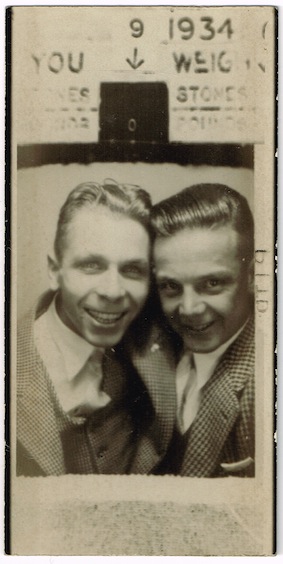 Our young man on the right, in 1934. Love those almost identical suits and those hairstyles!

Photoweigh photobooth photos are rare. Between the 1930s and 1970s when the last of these booths disappeared, there appears to have been only a handful scattered across the UK, Germany and France. Although a business called the American Automatic Photoweigh Company Inc. was registered in America, there does not appear to have been any booths operating there.

These English photos from 1934 and 1939, above and below, are even rarer than typical, holiday-souvenir Photoweigh images, as they show the same young man in two close poses with his male friends. There are many photos for sale online which purport to show gay or lesbian lovers. In most instances it is decidedly unclear as to whether the subjects are just pals or in closer relationships. However in this instance, I think it is safe to say the men pictured here are more than just friends.

At a time when homosexuality was still criminalised, taking affectionate same sex snapshots to a commercial printer, posed risks to what would have needed to be clandestine relationships. Without access to your own darkroom, photobooths were the only way to commemorate a gay relationship in private and with confidence. Photobooths created images without a tell tale negative or in the case of some Photoweigh machines where a paper negative was supplied with the finished positive, leaving no record in the machine.

Despite the happy and loving nature of these photos, there is a heartbreaking poignancy to them, given the prejudice and suffering endured by the same sex community at the time. The young man who is pictured in all three photos, looks a jolly type. I hope that translated into a fulfilling and happy life despite the obstacles he would have had to face.

You can read more about the history of this type of photobooth here, and see more Photoweigh images here.

Someone has kept these two battered and dirty photobooth photos side by side for a long time, possibly in a purse or wallet. They found their way to a US flea market in unison, too.

With no information on the backs, these photos could have been taken anywhere, but the uniform of the soldier and the style of luxurious, tumbling curls of the young woman mark these as having been made at a particular time; WW2. There is a melancholy look to their smiles. Was it a wartime romance cut short by an imminent departure for duty, perhaps?

It is cute that they both blinked at the same time in the second image. It gives the impression that they are both meditating on their love, sending their thoughts to each other through their heads-together embrace. You can see the soldier’s hand at bottom right of each image, holding his girl tight. He never wanted to let her go.

I hope it wasn’t just the photos that remained together. Now that these photos are mine, I can guarantee, that at least in these two dimensions, they will never be parted.

Isn’t this a wonderful portrait of what I presume to be a long standing, married couple? There is a relaxed warmth and familiarity between the two. I love their hats and the man’s upturned face and eyes. Is he looking at something or someone, or just good at choosing a comic photographic angle? There seems to be a benign amusement in the woman’s eyes. Is her partner a perennial joker, no longer very funny to her but loved none the less?

Is there anyone out there, who has the time and inclination to work out the inscription on the back of the above photo? Obviously they are names, but the surname of Konrad, is the only word I can make out. I bought this from the USA.

Here is USA Tattoo Man and his friend once more . I think he is eating a hamburger but it could just be a bagel or filled bread roll, judging by his friend’s wee morsel. As with the previous posts in the series, that you can see here and here, I only own the above photo. You can see it in its original context below.

I have played with the tags in today’s edition. When I posted an image of myself eating a peanut butter dream bar,  I added “woman eating a banana” to see how may extra hits it got. (You can read the story behind why I did that, here.)  It turns out it is a rather successful ploy. My stats were very impressive for that day. So if you are here looking for a man/woman eating a sausage, or a man/woman eating a banana, sorry. You have been the victim of an extremely infantile prank – but hey, why were you searching under those tags anyway, hmm??

Following up from Part One, here is Tattoo Man on the phone in a photobooth with his partner. Once again I only own four individually cut photos from this series, this being the second of them.

Below are some of the complete strips from the original sale on Ebay. You can see the above image in its original context and two other strips of the same man and another partner who only appears in this one, heavily altered, series. It is also the only strip to be dated out of the dozen or so scanned from the seller’s website. It is hard to work out a scenario that explains why such a wonderful collection should have ended up in the public domain so quickly after its creation. (It is dated the 19th of May 2003.)